In the summer of 1993, Wayne Dempsey worked diligently on construction and improvement of the MIT Solar Car.  The team won the commuter class in the 1993 Tour de Sol as the car raced through the streets of Harvard Square.  Utilizing the Institute's Undergraduate Research Program (UROP), Wayne spent the summer with his fellow teammates touring the car on a several-hundred mile trip through New England. 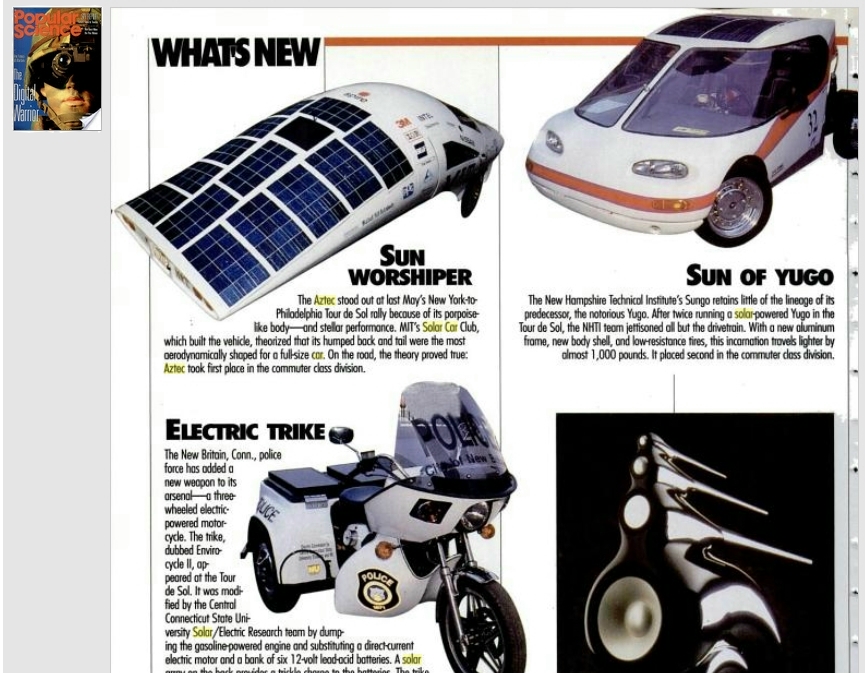 Walking along Massachusetts Avenue a few weeks ago, one may have seen an airfoil-shaped vehicle with a panel of solar cells on its roof, and moped and bicycle tires for wheels. Named Aztec, the car is the product of two years of hard work by the MIT Solar Electric Vehicle Club, and it won top honors in the 1993 American Tour de Sol which ended on May 29. 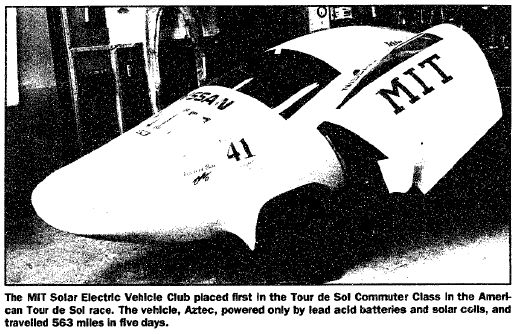 Commuter vehicles such as Aztec are designed to recharge their batteries overnight, according to Kathleen Allen, the club's advisor. The Tour de Sol category limited vehicles to two riders, 500 to 7200 watt-hour batteries, and other physical constraints. Other commuter categories included vehicles with unlimited battery power, and vehicles of which five or more had been sold.

Tour de Sol racers and Continental class vehicles, on the other hand, have only one driver and use sunlight as the primary energy source, Allen said.

Aztec is primarily powered by nine Sears Die-Hard lead-acid batteries, with about 12 percent of the power supplied by the solar cells. It is basically an "electric car with solar assist," Allen explained.

"The key reason for our success was the car's efficiency," said team member Hao Chien '95. "Our car's range was even better than most of racers in the unlimited battery power category."

"The team was a bit disappointed to discover the batteries were on sale for about $430 after the race," team member Michael B. Wittig '96 added jokingly.

The course zig-zagged along the east coast from Boston to Burlington, VT, over the course of six days. The competition was designed to test speed, reliability, and range. All of the vehicles were expected to keep up with highway traffic, while staying within the legal speed limits. They also had to be able to negotiate both flat and hilly roads, Allen said.

Each day covered at least 60 miles -- the minimum distance that an average commuter would use between recharges. Teams earned credit for any extra mileage driven until the batteries completely expired.

Aztec travelled a total of 563 miles by the end of the fifth day. In comparison, Solectria's car, the Force GT, had unlimited battery power and travelled the farthest with a total of 710 miles.

"In a race like this, reliability is a key asset. Despite several glitches just before the race ... the car ran flawlessly for almost the entire event," Wittig said.

At 780 pounds and about 14 feet long, Aztec has a top speed of 50 miles per hour and a maximum distance of 135 miles at 40 miles per hour on a single charge, Allen said. Two years ago, people were struggling to travel 40 miles per day, she added.

In comparison, commercial cars such as those made by General Motors and Chrysler range from 50 to 100 miles per charge, according to Wittig.

Aztec includes a double-wishbone suspension, coil-over shock suspension, rack and pinion steering, and three hydraulic disk brakes. The body is made from carbon fiber with a honeycomb core. "Everything else, while exotic for a car, is not unusual for this type of vehicle," Allen said.

Most of the costs are supported by corporate sponsors. The club is very successful in soliciting donations of materials such as fiberglass, carbon fiber, chrome-moly tubing, and epoxy, Allen said. But monetary donations, mostly needed to buy batteries and solar cells, are harder to obtain.

The club will be working on their next vehicle, Galaxy II, over the summer and the next two years. Galaxy II will be a purely solar-powered car so that the club can compete in more races, such as the General Motors Sunrayce and Australian World Solar Challenge, according to team member Ivano Gregoratto '96.

Article courtesy of The Tech

The Solar Electric Vehicle Club has been successful in past efforts to build solar-powered race cars. But now it is using its experience for more practical purposes.

"Aztec is an electric, two-seater commuter car. It will be a three-wheeler with a double-wishbone suspension. It will weigh approximately 800 pounds, which is a lot less than commercial electric cars like General Motors' Impact," said Goro A. Tamai '93, a co-director of the Aztec chassis group.

Many components of Aztec, the club's entry into the Tour de Sol racing competition later this spring, are lying in various stages of completion in a workshop in Building 20. Within three weeks Aztec will be completed and put through initial driving tests in a car convention, Tamai said.

"The major parts of Aztec are a Kevlar-fiberglass body shell which is almost done, a chromium-molybdenum frame, a $10,000 DC brushless motor, a drive train, a high energy density battery, probably lead-acid, and the electronics which is the hub of Aztec," Tamai said. "Actually the battery is probably the most important part of an electric car, but we don't do any battery research. So the electronics is the most important as far as the work our club does is concerned," he added.

"The electronics is a motor controller which optimally transfers the power from the battery source to the electro-motor. It was designed by Gil Pratt when he was a grad student here at MIT. Any electric car worth driving has a motor controller. Ours is one of the best in the world," Tamai said.

The 45-pound carbon fiber body shell of Aztec was optimally designed from aerodynamics programs. Its coefficient of drag is about 0.12; a normal road car has a drag coefficient of about 0.35, Tamai said.

"We have a good chance of winning the Tour de Sol commuter car race because Aztec is so light. Most colleges are entering the solar car race, so our competition will be mainly from companies, especially Solectria, which was founded by a former MIT student," Tamai said.

"The body shell of Aztec took about 1000 man-hours to make. First the design was translated into 85 separate sections of styrofoam plugs. Then, similar to summing the different sections of an integral, these 85 parts were glued together to give a rough shape of the model. A mold was made of this and sanded down to the shape of the final shell. Kevlar and fiberglass sheets were then put into the mold; after heat treatment, the fiber shell was popped out of the mold," Blasch said.

"This club and contests like Tour de Sol give students a great opportunity to use what they learned in the classroom in real-world situations. This is a real-world project: We go to Athena to use software packages, we weld and machine parts, we deal with funding like any real company would. Also, the electric car is a current engineering problem that needs to be solved soon. The club is a part of this," Tamai said.

Recent California legislation mandates that 2 percent of all cars sold there have to use alternative fuels such as methane or electricity by the end of the decade. The performance and driving range of gasoline-driven cars remains superior to that of commercial electric cars.

But that makes the research even more important. "Electric cars have a huge future," Tamai said.

The club placed second last year in both the Tour de Sol and Arizona 500 races. This is the first time the club will place an entry in the electric commuter car division.

"Aztec is fun. It's a worthwhile cause. Rather than learning only technical stuff, its applying what we learn," said David A. Hampton '92, one of the club's captains.

Article courtesy of The Tech